During the summer of 2012, some Hinkley residents complained about black water coming from domestic wells. There was a concern that black water was a result of remediation actions being conducted by PG&E for chromium contamination. Water samples collected by citizens and the Water Board showed that manganese was found at unusually high concentrations in certain water supply wells.

Manganese is the twelfth most abundant element on earth and is a naturally occurring metal that is found in many types of rocks. Because of this, manganese is routinely dissolved in groundwater and found in drinking water at low levels. Sometimes higher than normal levels of manganese occur when groundwater becomes reducing, meaning the oxygen is removed, from either natural or man-made conditions. If groundwater with dissolved manganese is aerated, such as in a shower, plumbing fixture, or from a pump in a well, a rapid reaction can cause manganese to precipitate out as small suspended solids, causing a black color and staining. Drinking water containing manganese or swimming or bathing in water containing manganese may expose people to this chemical. The nervous system has been determined to be the primary target organ of manganese, with neurological effects generally observed in association with high concentrations of the metal.

Neither the U.S. Environmental Protect Agency (US EPA) nor the State of California has established a primary drinking water standard for manganese based upon health effects of the chemical. The U.S. EPA, however, has established a secondary drinking water standard of 50 ppb based upon taste and staining. It has also set a Lifetime Exposure level of 300 ppb based upon the neurotoxin effects from manganese. California has set a health-based notification level of 500 ppb in which municipal and community water suppliers must report to the State Department of Public Health—this does not apply to owners of domestic wells. Of the three numbers given, only the 50 ppb secondary drinking water standard is an enforceable limit; the other two numbers are considered guidance to communities.

A Manganese Working Group was formed to investigate the manganese detected in some domestic wells in the Hinkley area. The Group consists of staff from the Water Board, the U.S. Geological Survey, PG&E, a subcommittee of the Community Advisory Committee and its Independent Review Panel (IRP) Manager, Project Navigator. Group meetings took place in December 2012, and January and February 2013.

The Group compiled a table of laboratory results of manganese in water samples collected from the different affected residences. This information was presented on a map along with the locations of PG&E’s In-situ Remediation Zone (IRZ) areas. The Group also compiled historical manganese data collected prior to late-2004 when IRZ operations began.

The Group discussed how manganese is a common element in desert environments and can occur naturally at low levels in groundwater. USGS data shows past manganese detections in groundwater in the Hinkley area ranged from non-detect to 75 ppb. At PG&E’s IRZ areas, manganese was detected up to 33 ppb just prior to the first IRZ injection to groundwater. PG&E has demonstrated that manganese formation in the IRZ area, for the most part, was reasonably monitored. The recent manganese findings in some residents’ water supply may be due to other causes not related to the PG&E cleanup actions. Additional investigation is still needed to determine the cause of high manganese concentrations in other residential wells. 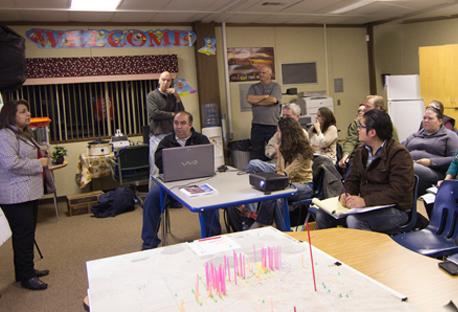